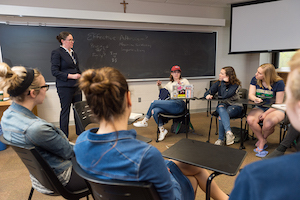 Most students come to the University confident that there are truths to be uncovered in mathematics and by broadly empirical disciplines, including history and the sciences. But many students also come to university skeptical that there are any truths about the world to be discovered by reason which go beyond the scope of these disciplines. This leaves questions about the existence and nature of God, ethics, the nature and destiny of human persons, the scope of knowledge, and the existence of freedom of the will—among many others—in the realm of “opinion,” and hence outside the scope of serious intellectual inquiry.

Catholicism has always had a more optimistic view of human reason, and hence has always endorsed the value of philosophy, which is the discipline which attempts to bring reason to bear on questions, like the ones just listed, which go beyond the resources of empirical disciplines. No Catholic education can be complete without the study of philosophy.

Because almost no students have had any exposure to philosophy prior to coming to the University, a first course in philosophy will typically cover many different philosophical topics rather than focusing on one or two. A second course in philosophy gives students a chance to explore philosophical issues which may have been raised in their first philosophy course in more depth. These issues may be connected to the student’s chosen course of study or the student’s interests. So, for example, a student majoring in physics might take a second course in the Philosophy of Science; a student particularly interested in religious or ethical questions might take a second course in the Philosophy of Religion or one focusing on a cluster of applied ethical questions.

As the foregoing suggests, the central learning goal for philosophy courses in the core is:

This is understood as involving the following obligatory learning goals:

It should be evident from the syllabus of a course satisfying the philosophy component of the core that it is designed to meet the learning goals just stated. This should not just be a matter of including readings drawn from the history of philosophy, but also a matter of including assignments which challenge students to think for themselves and form their own views—informed both by logic and by the arguments of past philosophers—on philosophical questions of enduring significance.