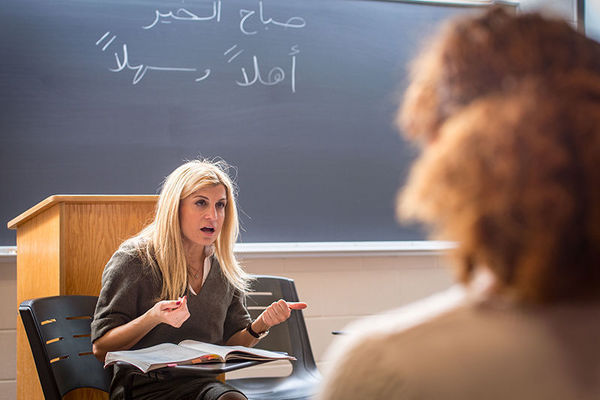 The advantages of foreign language study are numerous and more vital than ever in our increasingly globalized and multicultural world. In the university setting, few things deepen acquisition of linguistic and cultural fluency more than studying culture in the target language in a community of language learners. Exposure to literature, film, journalism, history, culture, political discourse, etc. in the target language lends an invaluable insight into different cultures and a deepening understanding of beliefs, traditions, and cultural patterns.

Extensive reading, writing, and speaking in a different language requires students to put themselves in the position of peoples from various times and places. Through intensive engagement with languages and cultures students learn to recognize and respect difference and to engage the perspective of others in order to understand better and to reflect critically on their place in a diverse world.

The option to satisfy a core requirement in advanced language and culture is open to students who have passed through intermediate language and culture courses and are prepared to take advanced courses at or above the 30000 level. In these courses students study texts and other cultural objects in the target language and will be encouraged to continue to develop language competency and to engage meaningfully with cultural content.

At Notre Dame, we offer courses that fulfill the advanced language and culture requirement in 13 languages in five different departments. Because attaining proficiency differs among languages, criteria to fulfill this requirement vary:

Courses in Spanish, Italian, French and Portuguese at the 30000 level and above that evaluate and interpret a spectrum of cultural phenomena including authentic texts, art, film, and popular media through a range of critical approaches fulfill this way of knowing. Courses focus on expanding proficiency in the target language through analyzing, interpreting, and thinking creatively about complex texts and ideas within a broader historical and cultural context, as well as reflecting critically about their own culture and globally.

German courses at the 30000 level and above that treat authentic texts in the original language across genres, including film, the performing and the visual arts, fulfill this way of knowing. Courses focus on learning strategies for reading and interpreting longer or complex texts as well as reflecting critically on literary and cultural texts. Classroom format centers on student discussion in German of primary and/or secondary texts and all assessment is in the target language.

At the 40000 level, Russian courses focus on authentic texts primarily in literature (poetry, prose fiction, drama) with support from the disciplines of film, history, and journalism as well as popular media. Through these seminar-style classes, students expand their proficiency in all modes of the target language, learn to become more sensitive interpreters of sophisticated forms of discourse, and broaden their knowledge of the seminal ideas, figures, and events in the panorama of Russian culture.

Arabic courses at the 30000 level and above expect students to acquire complex forms of literacy in a range of content areas such as literature, Islamic history and thought, film and media, among others. In these courses students expand their communicative proficiency in tandem with developing their abilities to analyze literary and cultural texts, determine evidence, reason critically, and engage Arab culture thoughtfully in the target language.

Courses in Greek and Latin focus on reading classical texts in original Greek and Latin at a significantly faster pace than intermediate courses, and on analyzing grammar and syntax with greater rigor. Courses highlight the different styles and rhetorical techniques employed by poets and prose writers operating within different literary genres and situate texts within their broader historical and cultural contexts. Courses introduce key reference tools and bibliography to aid independent research.

Courses in Irish at the 30000 level and above focus on engaging with materials such as literature, newspapers, journals, media and the arts in the original language. Students will strengthen their skills in listening to, reading and discussing complex pieces as well as related critical and scholarly literature.

In Chinese, Japanese, and Korean courses at the 40000 level and above, students develop advanced level proficiency, as well as gain deep cultural awareness. The courses integrate a variety of themes to expand students’ understanding of both traditional and modern culture and society. Selected authentic and primary source materials, including modern literature, history, newspaper articles, essays, and media such as TV series and movies are incorporated so that students are exposed to different spoken and written styles of the target languages. Through interaction with instructors and classmates, students evaluate and interpret language and cultural considerations, and employ critical thinking to consider Chinese, Japanese, and Korean languages and cultures within the global context.