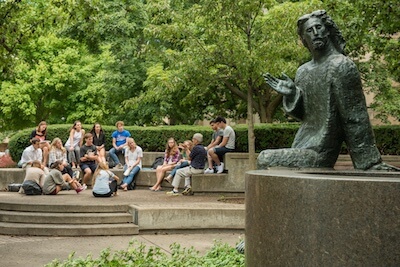 A Notre Dame undergraduate education should produce liberally educated women and men who possess basic cultural literacy, who are capable of articulate and logical reflection on the fundamental problems of human existence and who can take their place as citizens capable of critically evaluating arguments which bear on public affairs. Because Notre Dame is a Catholic university, its purposes also include the preservation, extension and transmission of Catholic thought. Notre Dame students should learn to think in depth about the problems posed by a life of faith. They should have the opportunity to learn how the great thinkers of the Catholic tradition approached those problems in the past, and what Catholicism has to say about those problems as they arise in the contemporary world.

An introductory course may be organized either historically or around philosophical problems. The department does not prescribe either the use of particular texts or attention to particular problems, because of the importance the department attaches to the freedom of teachers to design their own courses. The department does assume that introductory courses include exposure to some subset of the significant figures in the history of philosophy, and that in their written work and their examinations students will demonstrate acquaintance with the authors covered.

Students satisfy their second philosophy requirement by taking classes at the 200- or, occasionally, at the 300-level. These courses are designed to allow students to explore a subset of philosophical questions or authors of special interest to them, and to do so in greater depth than is possible in “Introduction to Philosophy.” These courses fall into four clusters:

A course need not fall into one of these clusters to satisfy the second philosophy requirement. But these are the clusters into which second courses have largely fallen since the department’s last review of the two-course requirement. Most courses fall into the first and third clusters, so that students have ample opportunity to explore their interests in ethics and values, and in the philosophical questions raised by religion. The department has consistently offered second courses on questions and figures central to the Catholic philosophical tradition. This allows Catholic students who are interested in studying the philosophical bases of their faith to do so.

As in “Introduction to Philosophy,” so in their second courses, students should demonstrate that they have met these standards. Individual instructors shall decide how the written work, and any other work required in their classes, shall be assessed to insure that they do so.