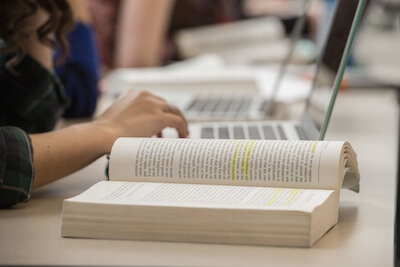 Literature can be defined either as the whole domain of letters (the word from which it is derived) – in other words, writing or books – or, more narrowly, as constituting the various literary genres: poetry, drama, the novel, and so forth. The two meanings of the term are connected, however, because, from the time of the Renaissance and up until fairly recently, a chief goal and method of education was the study of literature, namely classical literature. For that reason, when someone was uneducated, he or she was said to be unlettered. Literature, in both of these senses, continues to be fundamental not only to the College of Arts and Letters at Notre Dame but to the University as a whole.

A traditional synonym for literature (in the more restricted sense of the term) is the French phrase belles lêttres – “beautiful writing” – writing in which the words themselves cannot be separated from what they signify, so that form and content, medium and message, are one and the same. For this reason, the study of literature, more than any other discipline, makes one sensitive to language itself, and thus increases one's awareness of the world, not only in aesthetic but even in practical terms. Through the study of literature, moreover, one discovers that there is a kind of human knowing that is non-linear, integrative, imaginative, and creative. Literature reveals the deeper unities in knowledge and experience by linking disparate realms and by showing – through metaphoric, metonymic, and other figurative means – how the elements and patterns of human experience can have a significance beyond themselves. Literature is the collective voice of human memory and imagination in all of its range, inquiry, and differing points of view through time: it gives access to perspectives other than our own, and thus has the capacity to expose distortions or limitations in our understanding of ourselves and the world.

There are various kinds of courses that can satisfy the literature requirement. These will range from courses that focus on the linguistic and stylistic aspects of the text, to courses more focused on the cultural or social context within which literary texts function, to courses that emphasize theories of interpretation and literary signification. It should be noted that the literature requirement can be satisfied by courses taken in departments other than the English Department and by literature courses taken in languages other than English. A common feature of all of these courses, however, will be an emphasis on the close reading of the text.

Courses satisfying the literature requirement should address all three of the dimensions of literary study outlined above, and they should do this both through oral discussion and through writing assignments. All of the skills derived from the study of literary texts are important in themselves and also for any discipline or activity that relies on language as its medium. Because literature demands a focused critical response, and because it exposes students to the complex and varied ways in which language signifies, the study of literature is invaluable in developing speaking and writing skills.